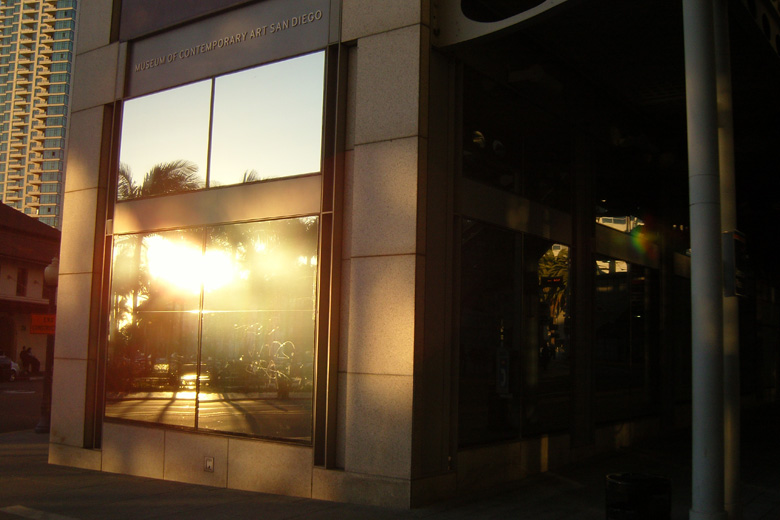 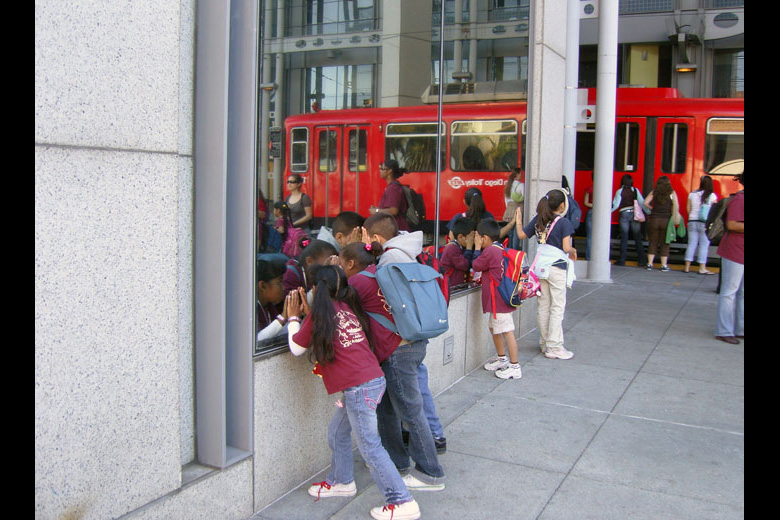 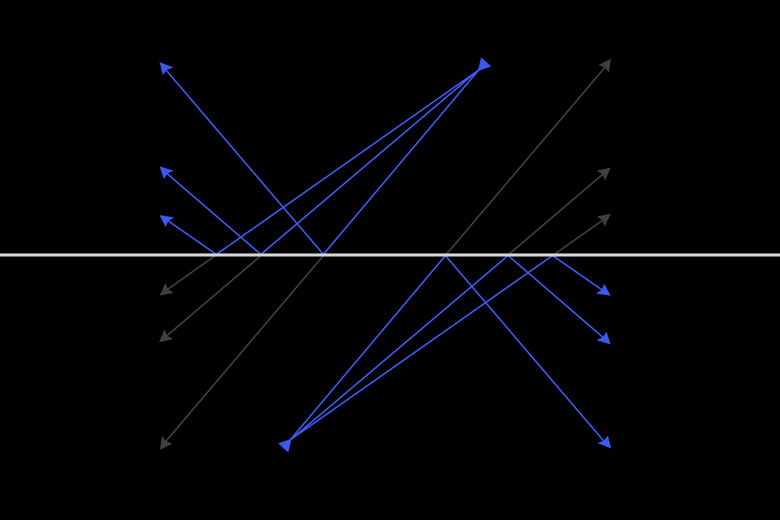 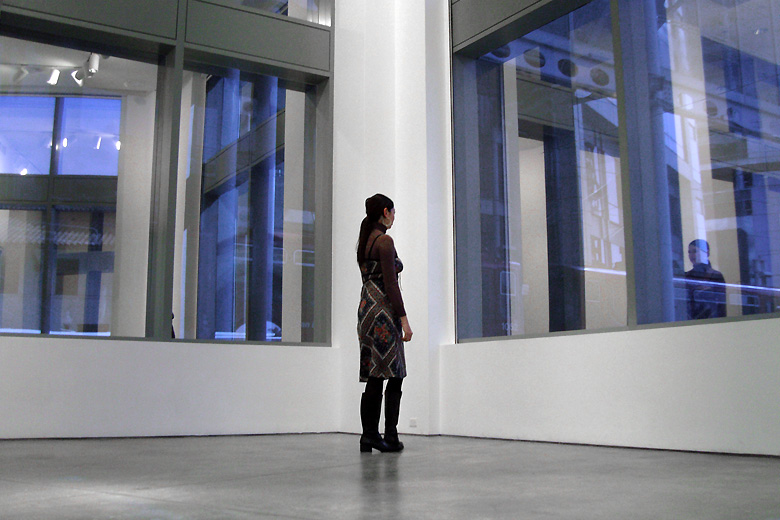 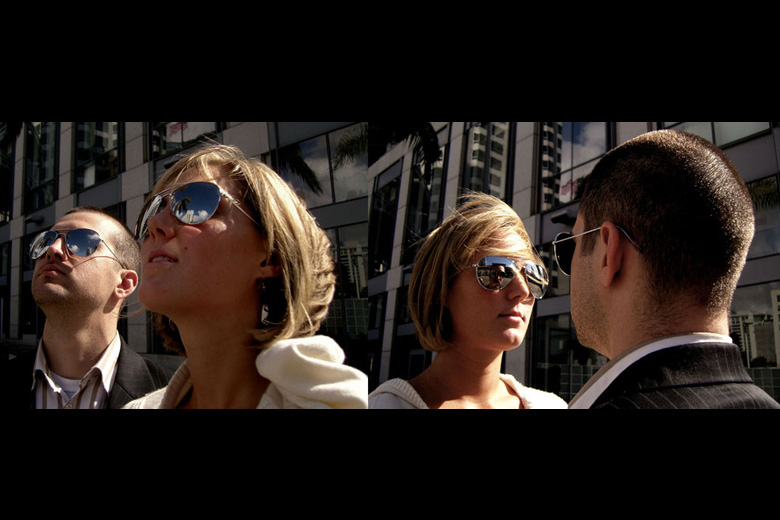 For his first solo exhibition in the United States, Zamora intervenes the windows of Fayman Gallery at 1001 Kettner, MCASD Downtown. The Gallery opens on three of its four sides to White Plaza and to America Plaza trolley station through large windows that are the most characteristic architectural features of the space. Commissioned to create a site-specific artwork in this particular gallery, Zamora became interested in expanding the parameters of the term away from its ready association with direct engagement with the physical features of the environment, towards an exploration of the way users function within a given place. As Zamora explains, his intervention “exploits the characteristics inherent to the space, its basic architectural features and key location in a transportation hub in San Diego, but is all about the politics of seeing oneself and others in public and private.”

The ephemeral work, titled Specular Reflexions, consists of the application of 2 layers of two-way mirror film to all 16 Fayman Gallery windows, creating a surface that, as his diagram indicates, functions equally inside the Museum as outside. Depending on the time of day, the two layers of film are either highly reflective or see-through, mirroring the activities that take place before the glass while allowing the viewer to see what is going on the other side. Used for double-view mirrors in interrogation rooms and other security partitions and also commonly applied to the faÃ§ades of office buildings throughout Downtown San Diego, this film works on the principle that the face receiving most light mirrors it without diffusing it; inversely, the face receiving less light is translucent.

In physics, the term ‘specular reflexion’ describes the behavior of light as it bounces off a smooth surface at exactly the same angle as it hit, producing a symmetrical double of the incoming light beam. By applying one layer of mirror film over another, Zamora exaggerates the film’™s reflexivity but also compounds its translucency, creating the conditions for a conceptual conundrum. The Fayman Gallery windows reflect back to the viewer within the gallery his or her own image in that space, emphasizing the position of the spectator in the process of perception and consumption of a work of art within an art museum. But like Dan Graham’™s Yin/Yang Pavilion (2002) at MIT in Cambridge, Massachusetts, which also uses a two-way mirror, these surfaces create a double image effect where, depending on the time or day or whether one is inside or outside, the spectator’™s mirror image is overlaid over someone else’™s who is physically located behind the glass. The viewer’™s individualistic self-identification, his or her mirror image, becomes confused with that of many distant others.

Interested in exploring further the dissolution of the self into a social group by projecting one’™s reflection onto someone else, Zamora created a series of digital photographs using the Museum staff as models bearing Ray-Ban mirrored aviator sunglasses. The digital shots of a young man and woman looking directly at one another and at the city while their eyes are hidden behind each other reflection, is oddly Californian and humorous’”like a quirky representation of a doomed West Coast love affair whose beautiful protagonist can only see themselves in the other.

For Zamora, the application of reflective film commonly used on the exterior of glass structures on the interior of the building articulates his intention to create a point of architectural disjunction within the Museum, as if the urban fabric and the social scenarios outside had suddenly erupted within. This intrusion of public space into private space became a key focus of the artist as he spent 2 weeks in the gallery, working on his laptop computer and observing closely the behavior of people inside and outside the space. ‘I noticed that everyone who came into the gallery had the tendency to look out into the street, while on the outside the trolley riders almost always used the windows as a mirror to check themselves out or fix their hair or outfit. Most people either did not notice me in the gallery, or did not care to alter their behavior once they saw me in that space,’ he comments.

Transparency denotes access and openness; yet, for Zamora the Fayman Gallery windows are also the marginal thresholds separating definitively private Museum space, devoted to viewing artworks, from the public area, dedicated to facilitating the wait and transportation of the transient trolley riders who are the primary users of the America Plaza outside. He felt that while the windows allow the possibility of equal perception from within and without at a key point in San Diego’™s urban grid’”and therefore indicate availability and openness’”behavior patterns and, more specifically, habits of viewing constitute another structural layer that regulates what people expect and how they conduct themselves inside an art gallery or in the supposedly open space of the street.

Function, usage, audience, and finally tenure, possession and ownership differentiate these two spaces and make each liable to very different rules and codes that dictate not only appropriate use but also allowable social behaviors. During his residency Zamora was surprised to find, for example, that while within the Museum a visitor is actively encouraged to idle and simply observe artwork, with no purpose other than pleasure in seeing, San Diego’™s Municipal Codes have ordinances against loitering, a term which means to stand idly, to stop numerous times, or to delay and procrastinate. The same type of behavior means very different things, and meets with different consequences, on either side of the window pane.

Zamora’™s intervention picks on key characteristics of Minimalist and Conceptual work of the sixties and seventies. Artists like Chris Burden and Sol LeWitt sought economy of means and conceptual clarity as a way to elaborate a critique of existing aesthetic positions and institutions. Zamora’™s mirrored windows expand the geometric features of Fayman Gallery through a concise formal alteration that brings attention to that space’™s given features and structural repetitions. But the piece’™s minimal aesthetic masks a more conceptual and possibly transgressive intention, as the gallery space which would normally hold an object placed there for the purpose of viewing is itself the object and the detonator of a variety of ways of seeing explored through reflections. While the piece recalls Robert Irwin’™s challenge to art institutions to investigate the possibilities of phenomenology and perception as the subject and object of the artistic experience, Zamora’™s Specular Reflexions brings attention to the social dynamics and institutional structures within which perception, of oneself and others, takes place.