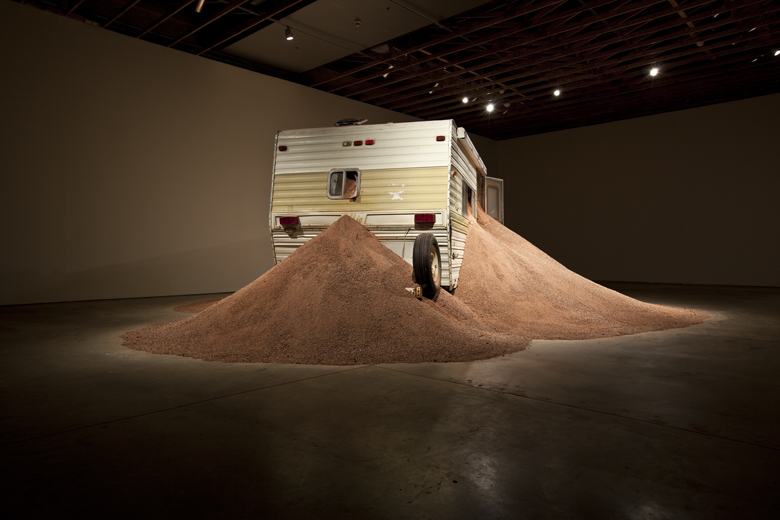 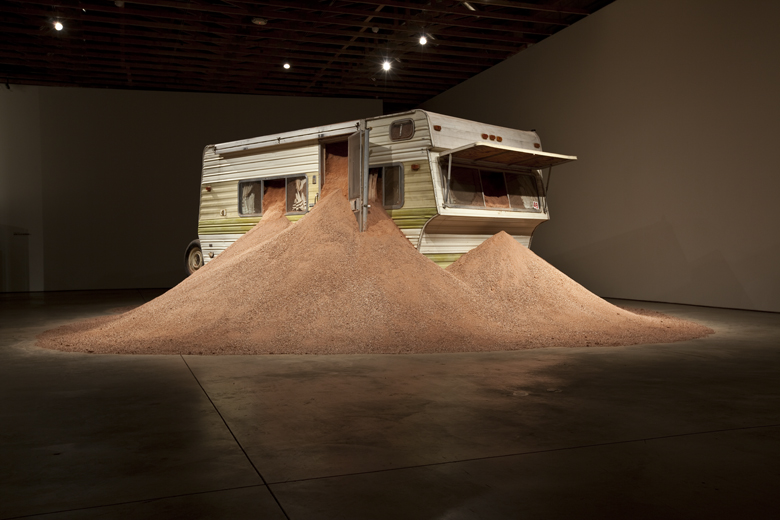 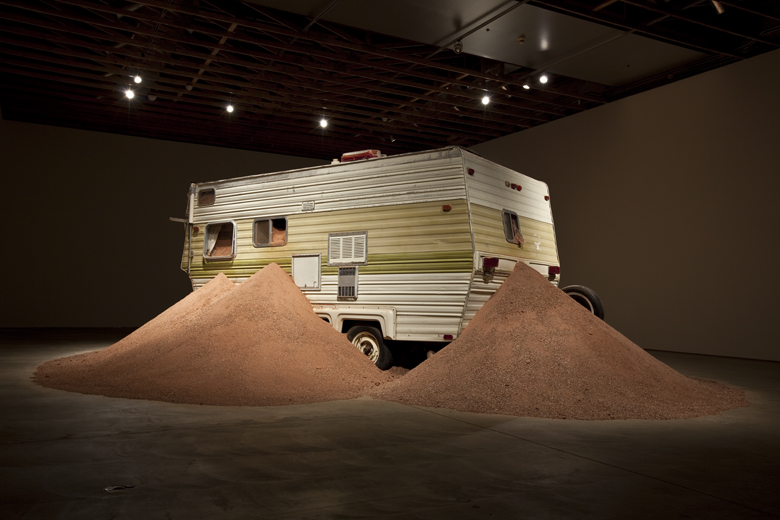 Héctor Zamora constructs artworks with local, utilitarian materials. Here, a heavily used 18-foot-long trailer groans under the weight of 30 tons of rock filling its interior and spilling out the windows into massive piles on the floor. The objects in this work tell a story. The native rock was mined immediately outside Phoenix and thus has ties to the labor and local economy. The trailer was the primary residence of a man who was saving to get an apartment. Objects abandoned inside it are clues to his life: flip flops, sports equipment, the title to the trailer that documents his move from California. Zamora honors those histories, presenting the materials as simply as possible.

During Zamora’™s 2011 research trip to Arizona, the artist studied the local effects of the economic recession and the residential housing collapse. He explored tract-home communities abandoned mid-construction; mobile homes and trailers squatting on vast stretches of rural land; and the Salt River Pima-Maricopa Indian reservation, tribally owned land a five-minute drive from the museum’™s front door. In every direction the single-family dwelling’”’the American dream’’”appeared threatened. The aftershocks of poverty left houses abandoned and communities dissolved. Zamora perceived the home’”a metaphor for family, a healthy economy and cultural values’”in crisis. In the work Zamora made in response, the trailer disgorges fragmented rock and sand, almost burying itself under the weight of its own disintegration. Reductio Ad Absurdum is a monument to the turbulence, but also the absurdity, of our times.

Architecture + Art: Héctor Zamora
On view at the Scottsdale Museum of Contemporary Art
October 27, 2012 through January 27, 2013

This exhibition, the third in the museum’™s ‘Architecture + Art’ series, includes two works commissioned by SMoCA, Reductio Ad Absurdum and OG-107 Scenery. Héctor Zamora was attracted to Phoenix, in part, by the opportunity to work in a city struggling with urban sprawl, yet surrounded by a raw and sparsely populated landscape. On a week-long research visit in October 2011, Zamora explored the crippling impact of the U.S. housing collapse on Arizona’™s new building construction and population growth, as well as the vast presence of the United States military infrastructure spread across the state.

Héctor Zamora is a truly international artist: born in Mexico, he resides in Brazil, and makes artwork all over the world. During the past decade, Zamora has completed large-scale architectural installations in both museums and public spaces in 21 countries on five continents. His work sets up radical juxtapositions’”sand pouring from an abandoned travel trailer; fifteen tons of bananas stuffed into a fifth-floor apartment in Columbia; nine trees suspended over a blighted, polluted river. The unexpected contrasts raise awareness of divisions, such as disputed territory, public and private space, cultural boundaries, economic privilege and poverty. In his projects, Zamora pries into political structures and often challenges the limits of physical materials, laborious construction, even the municipal laws of the places in which he is working.